I rediscovered Good Evening, Mrs Craven just before Christmas, and through happenstance was given Jan Struther’s Mrs Miniver not once, but twice for Christmas. The two are perfect bedfellows.  Mrs Miniver is a series of vignettes from the point of view of our eponymous heroine as she transitions from peace time into war, culminating in her writing her ‘1939 Christmas List’. Taken as a whole the novel is a celebration of life reported through the minutia of the everyday experience, from the fireworks at ‘Guy Fawkes’ Day’ to ‘London in August’.  Mrs Miniver’s ‘delight in noticing things’ can be profoundly moving as Panter-Downes creates an intimate tapestry of personal moments that make up a ‘lucky’ life, which becomes all the more precious as time passes and war looms.

“And when the first rocket went up Mrs Miniver felt the customary pricking in her throat and knew once again that the enchantment was going to work.  Some things – conjurers ventriloquists, pantomimes – she enjoyed vicariously by watching the children’s enjoyment: but fireworks had for her a direct and magical appeal.  Their attraction was more complex than that of any other form of art.   They had pattern and sequence, colour and sound, brilliance and mobility; they had suspense, surprise, and a faint hint of danger; above all, they had the supreme quality of transience which puts the keenest edge on beauty and makes it touch some spring in the heart which more enduring excellences cannot reach.”

As war then becomes a daily reality – queuing for gas masks, barrage balloons appearing over London and rehoming evacuees – Mrs Miniver expresses her hopes that some what she witnesses will become permanently embedded in London society.

I can think of a hundred ways in which the war has bought us to our senses.  But it oughtn’t to need a war to make a nation… carry rear-lamps on its bicycles, and give all its slum children a holiday in the country.  And it oughtn’t need a war to make us talk to each other in buses, and invent our own amusements in the evening, and live simply, and eat sparingly, and recover the use of our legs, and get up early enough to see the sun rise.  However, it has needed one; which is about the severest criticism our civilisation could have.

I wonder whether it is too much to hope that afterwards, when all the horror is over, we shall be able to conjure up again the feelings of these first few weeks, and somehow build our peace-time world so as to preserve everything of war that is worth preserving?

You might think it wartime propaganda, but I believe that much of Struther’s writing is astute and illuminating, and this book deserves a wider readership today.

My second recommendation is by Mollie Panter-Downes. Maybe best known for One Fine Day, Good Evening, Mrs Craven is a selection of her letters and 21 short stories that Panter-Downes’ wrote as the London correspondent for The New Yorker during the Second World War. 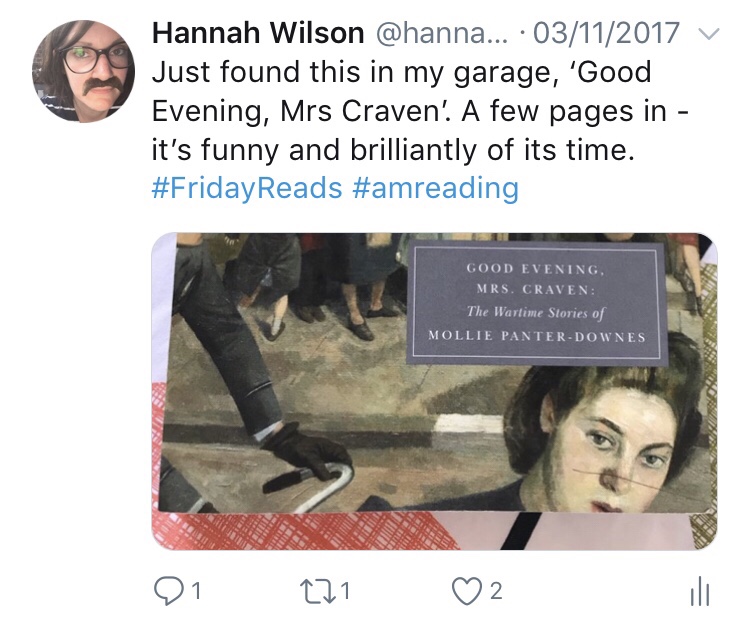 Banter-Downes captures so many facets of the war-time experience.  She is a shrewd and witty writer and her short stories are varied, insightful and, by turn, funny and moving.  In ‘Combined Operations’, the Butlers flee their friends and hosts, the Parsons, to head back to Blitz-hit London to the delight of all parties (the horror of unwanted guests is a recurrent theme in the stories, and even in Mrs Miniver her friend Lady J. insists on staying in London to avoid being a nuisance to her ‘awful’ son-in-law and ‘dreadfully country’ daughter).  Pacifist Don Merril joins the army, not through heroism, but an urgency to eat and is thereafter forever alienated from his previous bohemian existence (Fin De Siegle).    Ruth is broken, not by her husband initially shipping out, but by his almost immediate return and the strain of knowing they must part again (‘Goodbye, My Love’).  A mistress must cautiously call her lover’s wife to determine if he is dead or if she has simply been discarded (‘Good Evening, Mrs Craven’)

This collection also gives a nod to her war time journalism for The New Yorker, which you can find collected in London War Notes 1939 – 1945.   If you haven’t heard of or read any Mollie Panter-Downes, I do recommend starting with Good Evening, Mrs Craven, it is wonderful.

Casting my mind about for other great women writers of the period, I instead became fixated on Miss Roach from Patrick Hamilton’s The Slaves of Solitude. I will confess my love of Patrick Hamilton. I think Hangover Square is one of the finest novels of the twentieth century. And Kathy Burke thinks its a smasher too.  Also, Hangover Square has the greatest last line in all of literature, but no spoilers here.  So back to The Slaves of Solitude or ‘Hamilton’s greatest novel’ as my husband wrongheadedly claims. What makes The Slaves of Solitude a companion piece to Good Evening, Mrs Craven, and even Mrs Miniver, is Hamilton’s depiction of the bleaker side of London life during the war. Hamilton’s heroine Miss Roach is reminiscent of Miss Birch in Panter-Downes’ short story ‘It’s The Reaction’ where a lonely spinster rallies but fails to reconnect with her neighbours following the previously enforced intimacy of the air-raid shelter: “It was going to be another nice quiet evening after all, she thought hopelessly”.

In The Slaves of Solitude Miss Roach escapes the Blitz to lodge in a suburban guest house, which, like the novel, is dominated by the tyrant Mr Thwaites. After the lonely Miss Roach strikes up a romance with American GI Lieutenant Pike, her friend Vicki Kugelman becomes her love rival and Thwaites’ pitiless collaborator. Like many of Hamilton’s novels, the base cruelty of key characters, combined with the overall sense of Miss Roach’s isolation and helplessness, means it is at times an anxious and almost tortuous read.   However, whilst bleak, the writing is terse and brilliant and the characterisation strong.  The novel is also made more bearable by its satisfying denouement. Don’t let me put you off with ‘torturous’, it is a book that rewards more with every reading.

Beyond their London wartime setting, while the tone and class-focus differs, for me these three works are connected through a sense of immediacy, authenticity, eye for detail, and wit.  There is a sense of reportage in much of the writing that, if sometimes bleak, is revealing of the multifaceted reality of London life leading up to and during the Second World War. And, as always in Companion Pieces, all three are the work of great writers so if you want more from them, why not try London War Notes 1939 – 1945 by Mollie Panter-Downes or Hangover Square and 20,000 Streets Under the Sky by Patrick Hamilton

Please do tell me who the other great writers are who captured London life during the Second World War.

Bibliophile. I read books. I read about books. I listen to books. And sometimes I write about books. View all posts by H L Wilson

This site uses Akismet to reduce spam. Learn how your comment data is processed. 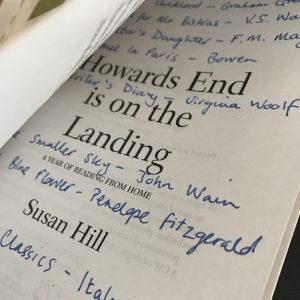 Can you recommend something to read? Book recommendations from Nick Hornby, Susan Hill and David Miller.  Read more.